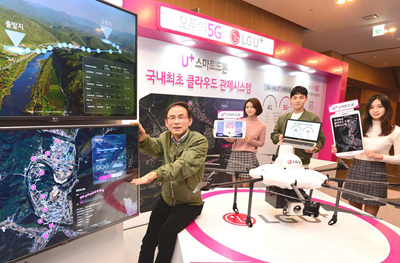 Terra Drone Co., Ltd., the leading Japanese commercial drone service company, has commercialized UTM(Unmanned Traffic Management)system for the first time in Korea collaborating with LG U+, a South Korean cellular carrier owned by LG Corporation.
On November 21st, 2017, LG U+ CEO Kwon Young-Soo announced that LG U+ began “U+ Smart Drone UTM System,” which enables a drone to fly safely for disaster monitoring and logistic transport in BVLOS (beyond visual line of sight) and at night.
LG U + is one of Korea’s three major telecommunication companies and has just made a  full-scale entry into the commercial drone business to lead the 5G era. Besides, they demonstrated an autonomous drone of taking off in a remote location carrying out duties at the destination and returning to control center on its own.

■ Autonomous drone successfully found a lost child in three minutes.
In the demonstration of the UTM system, the autonomous drone found a 6-year-old boy wearing a red jacket at Kamiwa Koro Park in Seoul, Korea in three minutes after remotely flying the drone.
“There are no other solutions than a drone to scan a wide area like Uwawa-Kyo Park in such a short time, which is about 20 times of a football stadium.  We believe that the use of the UTM system will greatly contribute to society ” said LG U+ Director of Operations Kwon Yeon Hoon.
A real-time distribution of the missing child sent to the nearby safety personnel via the drone, and it returned safely to the planned route. In the UTM system, conditions of a site can be assessed such as radio wave condition, flight speed of drones, remaining battery amount, weather information – wind direction, wind speed, temperature, etc. It also shows latitude and longitude information of the drone’s flight path.

■ Remotely fly a drone at a distance of hundred kilometers.
LG U+ Smart Drone UTM System enables drone operators to control drones at hundred kilometers away wherever the network is connected. Unlike traditional way, which manually operates drones, just by entering the destination, the entire process from a take-off of the drone to its return can be conducted autonomously.
It is also possible for multiple people to monitor a drone at the same time or one can make a flight plan for multiple drones, which applies to various industrial fields as an efficient drone control system.

■ Optimized various functions
With U+ Smart Drone UTM System, weather information such as humidity, wind direction, wind speed can be checked at any time.
Also, it shows the radio-field intensity and set the flight route to the area where the radio-field strength is high.
As one of the features of U + Smart Drone UTM System, drones autonomously stop flying when it recognizes other drones, aircraft, and birds. In an emergency, drones utilize the parachute equipped to land in a safe area.
The world’s first function is added, which is data taken by a drone can be seen with IPTV in real time with high definition video of full HD level. In the 5 G era, it is possible to transfer data 10 times faster than LTE so that beautiful high-quality images transmitted by a drone can be gained in real time without any delay.

STAY UP TO DATA

This website uses cookies to improve your experience while you navigate through the website. Out of these cookies, the cookies that are categorized as necessary are stored on your browser as they are essential for the working of basic functionalities of the website. We also use third-party cookies that help us analyze and understand how you use this website. These cookies will be stored in your browser only with your consent. You also have the option to opt-out of these cookies. But opting out of some of these cookies may have an effect on your browsing experience.
Necessary Always Enabled
Necessary cookies are absolutely essential for the website to function properly. This category only includes cookies that ensures basic functionalities and security features of the website. These cookies do not store any personal information.
Non-necessary
Any cookies that may not be particularly necessary for the website to function and is used specifically to collect user personal data via analytics, ads, other embedded contents are termed as non-necessary cookies. It is mandatory to procure user consent prior to running these cookies on your website.
SAVE & ACCEPT