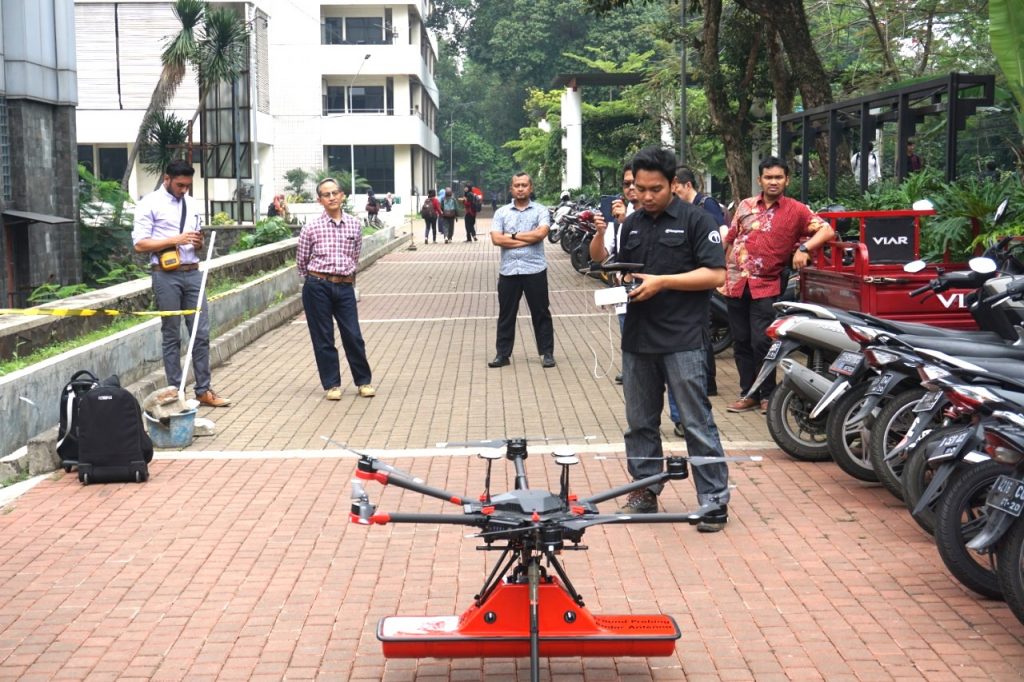 Working in collaboration with PT Airborne Geophysics Indonesia and the Geophysics Laboratory at the Bandung Institute of Technology (ITB), Terra Drone Indonesia flew the GPR-equipped drone at different altitudes and speeds to map tunnels and underground utilities at the ITB campus. The drone data was then processed and compared with the infrastructure records of the university by geophysicists. It was discovered that the GPR drone had accurately and precisely mapped the underground asserts.

The combination of GPR and drones opens up new potential for the use of unmanned technologies in areas that are traditionally both challenging and unsafe. For example, by scanning areas that have potential hazards, a GPR-equipped drone can be used to model post-blast areas in open-pit mines. In sectors such as construction and utilities, a GPR drone could be used to locate underground pipes, map the conditions of the assets, and detect hazards like pipeline leaks.

“The conventional GPR method requires field personnel to go to the field and carry GPR tools to conduct surveys. But this method has its own dangers because not only are some areas unsafe and difficult to reach but also because severe weather conditions in the field can hamper workers from carrying out their jobs diligently. GPR drones, in contrast, have emerged as a much safer and efficient surveying solution,” says Michael Wishnu Wardana, Managing Director of Terra Drone Indonesia.

It should be noted that Terra Drone Indonesia and ITB have joined forces to test new technological innovations several times in the past as well, including validating Terra LiDAR’s topographic mapping capabilities at ITB’s Jatinangor Campus. The drone service provider remains open to collaborating with parties interested in its new GPR application.

In addition to Unifly, Terra Drone’s other previous investments C-Astral, which develops high-endurance fixed-wing UAVs; RoNik Inspectioneering, which provides wireless inspection services for confined spaces; and Ventus Geospatial, which has patented gas leak detection technology. Going forward, Terra Drone will continue to invest in technology companies with cutting-edge solutions for drones. For all the latest news and information about Terra Drone, visit the company’s LinkedIn and Twitter handles.

STAY UP TO DATA

This website uses cookies to improve your experience while you navigate through the website. Out of these cookies, the cookies that are categorized as necessary are stored on your browser as they are essential for the working of basic functionalities of the website. We also use third-party cookies that help us analyze and understand how you use this website. These cookies will be stored in your browser only with your consent. You also have the option to opt-out of these cookies. But opting out of some of these cookies may have an effect on your browsing experience.
Necessary Always Enabled
Necessary cookies are absolutely essential for the website to function properly. This category only includes cookies that ensures basic functionalities and security features of the website. These cookies do not store any personal information.
Non-necessary
Any cookies that may not be particularly necessary for the website to function and is used specifically to collect user personal data via analytics, ads, other embedded contents are termed as non-necessary cookies. It is mandatory to procure user consent prior to running these cookies on your website.
SAVE & ACCEPT